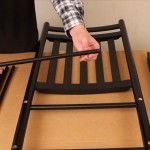 In this day and age, it’s not at all unusual for people to purchase furniture that they have to assemble themselves. Pieces of composite wood come neatly packed in a box, along with the hardware to put it all together. Then come hours of fun with instruction sheets, painstakingly screwing board A to slat B with nut Z and bolt H3.

It might be hard for some of the youth today to understand, but once upon a time, furniture-building was even more complicated than that. There were no instruction sheets or pre-cut parts. Everything had to be designed by the carpenter, then measured out carefully and cut, either by machine or by hand, and finally assembled with nails, screws or glue.

Thanks to advances in technology, the art of woodworking has become a pastime instead of a necessity. However, those who can master the craft are revered as artisans. Their work is far more valuable and sought-after by collectors for its high quality and its beauty. The pieces they create are often passed down to their children and grandchildren as heirloom treasures.

For those who haven’t mastered the art of woodworking, though, it can seem fairly intimidating trying to learn even just a little bit about it. There are so many different styles and so many different parts – each one with their own characteristics, histories and names.

When it comes to rocking chairs, however, there are a few universal traits that bind them all together. They all have somewhere to sit, and they all have a mechanism that allows you to rock back and forth. Knowing about the different parts of your rocker chair will help you in multiple ways. If you’re the sort of person who enjoys fixing broken furniture yourself, you’ll have an easier time identifying the part you need to repair or replace.

The Seat – Getting to the Bottom of the Matter

Over the years, many different types of seats have been designed for rocking chairs. Some favor comfort over style, while others look great but definitely don’t feel great after sitting in them for a while. Because the seat of the rocking chair is the part that supports the most weight, the remainder of the chair is built to accommodate it.

Seats for rocking chairs can be solid wood, like you might find with a traditional hardwood chair, and they can be flat or given a slight depression to accommodate the natural curves of the body. Such seats are known as saddle seats. Slatted wood can also be tightly fitted together as an alternative to the single, solid piece of wood for the seat. And while many rocking chairs go without padding, cushions are a popular choice with these types of seats, providing additional comfort.

Other types of seats are woven, especially if the rocking chair has been made from wicker. Materials can include woven rush or a tape upholstery material that the Shakers call “listing.” Sturdy swathes of cloth that have been secured to the rails also provide seating called a fabric sling.

The Legs – Giving Support and Stability

Even if they vary wildly in styles, all rocking chairs have legs of some sort that give the chair some stability and support the seat, just like normal chairs. The only difference is that these legs are attached to the rockers, letting them tilt back and forth.

Some styles of rocking chairs feature front legs that are far shorter than the rear legs.  These rear legs extend all the way up the length of the back of the chair, supporting not only the seat but also the slats that comprise the back itself. It’s interesting to note, however, that the distance between the floor and the seat is called the “leg” of the chair. Beyond that, the section ranging from the seat to the top of the chair’s back is known as the “stile.”

In other models of rocking chairs, the legs are of equal length, and the back is an entirely separate section attached to the seat and arms. Some chairs, like those made from bent cane or wicker, will even have the arm rests and the rockers as part of the same structure, foregoing the front legs entirely.

Of course, there are many of types of legs given fanciful names that are somewhat descriptive of their styles. These include the splayed or sabre leg, which has the leg bowing out slightly like the curved blade of a sword. A cabriole leg features a graceful, convex curve at the top that swoops subtly back and then forward again, ending with a taper.

A very basic structure that’s found on many models of rocking chairs are the arms. They’re useful to have, especially if you want somewhere to prop your elbows while you relax, or if you need something to grip for leverage while standing up from the chair.

The arms of a rocking chair are often little more than solid pieces of wood joined to the stiles and seat. Sometimes, it’s all one smooth, curving piece. Other times, there are multiple pieces – and in the case of more rigid styles of chairs, the smaller piece of wood connecting the arm to the seat is known as the arm support.

Cushioning is sometimes applied to the arms of the rocker, especially on the fancier styles of chairs. This small, cylindrical bit of padding is called the manchette. The word has a French origin, derived from the French word for “sleeve”: la manche.

The Rails – Holding it All Together

It takes more than just a seat, arms, and legs to make a rocking chair. Supportive structures are needed to keep them stable and sturdy, and many styles of rocking chairs have a lot of those short, thin pieces of wood that ring the perimeter of the seat. These “rails” are often squared or rounded, and can even be found joining the stiles of the chair, supporting its back.

The rails help to hold the chair together and serve as the linking parts between the legs, the seat, and the back. Without the rails, the whole thing would simply fall apart into a pile on the ground.

Some models of chairs use an alternative to rails. When the chair’s seat has flat pieces of wood ringing the seat – looking as if they’re hanging down – these are called aprons. The apron is a common feature on many dining chairs too, and they may be plain or feature decorative carving while supporting the seat or a cushion. They’re commonly reinforced by corner brackets.

The Stretchers – Supporting the Legs

One feature that’s commonly found on most styles of chairs are those pieces of wood which look like rails but join the legs together. These are called the stretchers.

There are front stretchers, side stretchers, and back stretchers. There may be just one set or two to keep the legs reinforced, preventing any bowing beneath the weight of the person who’s using the rocking chair. These are especially common on chairs with thinner legs, which are far more susceptible to the subtle, gradual warping that can happen over time.

Stretchers can even be used to join and reinforce other stretchers, forming an H-frame beneath the seat of the chair.

The Back – Letting You Lean Back and Relax

For the connoisseur of comfort, the best rocking chairs are usually the ones with the sturdiest backs. Cushions are often attached to the backs of rocking chairs as well, providing padding to the lower and upper back of the occupant.

There are a lot of different terms to describe the individual components of a rocking chair’s back. Vertical or horizontal slats are thinner, rectangular pieces of wood that may be straight or curved, spaced evenly apart, to fill in the space between the stiles. The top of the back is often referred to as the top rail, although it’s also sometimes called the cresting rail. Smaller, thinner rods of wood that are either plain or carved are known as spindles, while a solid, decorative, single piece of wood running down the back is referred to as a splat.

Some chairs forego having carved wood for the back entirely and instead rely on a woven fabric or woven rush back, often to match the seat.

And, as a point of interest, those decorative knobs at the tops of the stiles are called finials.

The Rockers – Without Them It’d Just be a Chair

Do all rocking chairs have rockers? Well, the answer depends upon your definition of a rocking chair. For those who favor a traditional look, a rocking chair just isn’t complete without the iconic, curved bands attached to the legs of the chair. On the other hand, some people consider the glider chair (also known as a platform chair) to be a rocking chair, since it allows a person to rock back and forth. A glider has a solid base and non-parallel, suspended, metal arms. Other styles of chairs through the years, like the Rococo Revival iron-spring rocking chair, had a central column and a spring mechanism for rocking.

Greater Than the Sum of Its Parts

Regardless of which parts a rocking chairs consists of, it’s the final result that really matters. The relaxation and comfort of a rocking chair is unmatched; they’re perfect on the front porch, in your living room, or even in a newborn’s nursery. Take a look at our full selection and find one that suits your style!