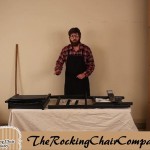 There are certainly rocking chairs out there which are available for less than $100. A budget-conscious consumer who wants to enjoy a rocking chair can hardly be blamed for being tempted by these cheap rocking chair options.

But as the old saying goes, “cheap can be expensive.” Let’s take a look at why these cheap rocking chairs will ultimately bring you far more headaches than joy.

Sometimes a cheap rocking chair sacrifices comfort in the name of lower prices.

You can get a rocking chair that is even more inexpensive by stepping down to an $86 “Metal Classroom Rocking Chair Seat.” This is basically the same hard plastic seat you probably endured in elementary school. It’s not even on rocking chair runners. Instead, it is set on a flexible metal curve that looks a bit like a tortured “C”. There’s no hiding that this chair is made out of plastic, either, so it’s going to look tacky no matter what you do with it.

Or how about the modern “lounge style” rockers with their thin, cheap fabric cushions that sort of fold and drape over the back of the frames, held in place with plastic straps? This chair can be yours for just $65, but you’ll only get a few weeks out of it before the cushion starts to slip. Once that happens, this “bargain” chair becomes almost impossible to sit in.

A lot of cheap rocking chairs are made out of plywood. Plywood is made out of thin layers of wood that are then glued together. Sometimes, plywood is even made out of waste wood or wood chips.

Sometimes, you’ll think a cheap rocking chair is made out of wood when it really isn’t. These rockers will typically be made out of a lightweight metal that’s given a wooden “veneer.” The metal is lightweight so that it ships for less—after all, nobody will buy a cheap rocking chair if they have to pay a fortune in shipping. That means that it’s typically prone to rusting, bending, and even snapping over time.

That’s not to say that wood is the only material worth building a rocking chair out of. Many fine outdoor rocking chairs are made out of an eco-friendly synthetic lumber called POLYWOOD. You can also find high-quality porch rockers that are made out of synthetic resin wicker. In both cases, these materials have been specially designed to withstand the rigors of everyday use. They can survive almost anything, unlike the materials that go into a cheap rocking chair.

One of the great joys of owning a rocking chair is the prospect of passing it down through the generations. The chair becomes a part of your family’s story, a tradition that is passed on from family member to family member over the long years. That’s not possible if your rocking chair falls apart within one to two years.

Some cheap rocking chairs don’t even rock! They just employ slightly curved supports that make them appear “rocking chair like.” You might get a little wriggle out of them, but you won’t get that relaxing, back and forth, smooth rocking chair motion. They don’t glide, either, as glider chairs demand a specific chair construction requiring the use of stainless steel ball bearings—which means it’s just not possible to sell them “cheaply.”

You can find a “Nordic Rocker Chair” for $62—and it falls firmly into this category. Remember the “Metal Classroom Rocking Chair Seat?” It’s not really a rocking chair either. It’s more like a bouncy chair.

If you really want a rocking chair, you’re wasting money instead of saving money by buying a cheap imitation chair that won’t do what you want it to do.

You’ll sacrifice the classic look of a real rocking chair.

Real rocking chairs are warm, friendly, and classy. Their traditional style instantly evokes many positive associations: leisure time, the bonds between family members and friends, the ties between neighbors, true relaxation and even quiet hours spent in the nursery with newborn babies. A pair of classic rocking chairs on a back porch invites people to talk about the things that really matter.

Many cheap rocking chairs are just…chairs. And while there’s nothing wrong with buying a chair that is just a chair if that’s all you want, a cheap rocking chair just isn’t going to get the job done if you’re truly looking for something more.

Remember when I started talking about POLYWOOD and resin wicker? Those materials were specially designed to withstand life outdoors. They don’t decay. They don’t rot. They’re UV resistant, so their colors don’t fade. You could leave them out in the middle of the worst winter storm and they’d shrug it off like it’s nothing.

If they’re made out of cheap metal, that metal is going to rust when it rains or snows. Eventually the rusted metal will snap when you go to sit down—not exactly the motion you’re hoping for in a rocker!

If they’re made out of waste wood or plywood then they’re going to rot away after they take enough water damage. Insects like to attack pressed pine or waste wood furniture as well, so you might sit down in your rocking chair one day to find that it’s been infested with termites.

POLYWOOD chairs and resin wicker chairs do have metal fixtures holding them together, but they’re commercial grade stainless steel fixtures. That means they won’t rust or corrode at all, and hold up just as well as the base rocking chair materials do.

As for wood, the right hardwoods last forever, even outdoors. Kiln-dried teak and cedar are both very hard and durable. They also retain their natural oils, which help to make them water resistant. As an added bonus, those same oils act as an insect repellent.

That’s not to say that hardwood rocking chairs won’t weather. They will, if you don’t give them the proper care. Usually this means attaining a silvery grey patina, which can be held at bay with the proper annual application of oil based stains or sealants. However, even if these rocking chairs are allowed to weather naturally this weathering will only impact their color—not their structural integrity.

What goes into the making of any product? Parts and labor, right?

We’ve already talked about how cheap rocking chairs can afford to sell so cheaply because they use cheap materials. But the manufacturers of these chairs also save a lot of money on labor.

They do this by going overseas, where the laws are a lot more lax about what employers can and cannot do.

Can you really feel good about a furniture piece that may have cost an American worker his or her job so that someone could get rich paying someone $2 a day for their 10 hour workday? Or knowing that they may have sliced the price by skimping on basic safety standards?

Those are practically slave labor conditions, and the people in those countries are only willing to endure them because they don’t have any other options. Supporting these practices encourages unscrupulous people to continue them instead of competing fairly with the rest of the world by leveling out the playing field and paying an honest wage.

These countries also typically have very lax quality standards, which play into the shoddy construction of their chairs.

A really good rocking chair will be made right here in the USA, by people who take pride in this great American tradition. People who use artisanal skills to produce heirloom quality pieces for good wages. People who are our neighbors and friends, who value what we value and who are treated well. That love spreads, because when you buy American you support the jobs of everyone you know.

But attaining all of these benefits does require you to be a little bit generous, and to be willing to pay a little bit more. Fortunately, you get an awful lot of benefits in return—and as it turns out, you don’t have to pay a lot more to buy a high quality rocking chair.

So how much should I pay for a rocking chair?

While it’s hard to get a good rocking chair for less than $100, you can easily find some incredible options for $119 to $180. In fact, the most you’d ever need to pay for a single rocking chair would be $699 for a Carolina Teak Rocking Chair (now on sale for $599 at TheRockingChairCompany.com). This chair is made out of the very finest Indonesian teak that anyone could harvest and is well worth the price.

Of course, we understand that not everyone will be prepared to invest quite so much into a rocking chair. A classic North American ash Slat Backed Rocking Chair is available for just $119. This is a bit discounted from its normal price of $164, but it’s a great bargain either way. Other North American ash rockers sell for as little as $139 or $149.

Bob Timberlake is a very trusted name in the rocking chair industry. These chairs are available in 6 brilliant colors for just $180. Again, they’re on sale right now (normally these chairs go for $349), but this just means that you’re getting a high-quality chair for a bargain price.

The Classic Pa’s Porch Rocker makes a great gift for Dad. It’s made out of cedar—and you can make it yours (or Dad’s) for just $184.

As you can see, you can get a really good rocking chair without spending a whole lot of money. In the long run, in fact, you’ll spend even less money, as these chairs will last for decades or even longer. By the time you’ve replaced that $65 chair three times you’ve actually spent $195—all to get a rocking chair that won’t serve you as well as the $180 rocking chair would have