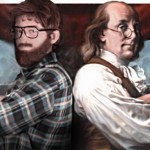 Rocking chairs have always been a genuine American invention. Many styles got developed over the decades—real distinctive stuff, too. Not like the early rocking chairs, which were literally just any old chair placed on runners and stuck in a garden. As you’ll find out shortly, rocking chairs even played a role in the history of two famous presidents.

It took a little while for the term to even enter people’s everyday speech. The Oxford English Dictionary didn’t even notice their existence until 1787. This may have contributed to the confusion, since Ben Franklin would have been more than old enough to have been given credit for the chairs by the time the term was given its proper respect.

Now, back then the chairs still weren’t real popular for casual use. They ended up becoming associated with hospitals and mental facilities, which didn’t exactly make them fashionable at first. The elderly did use them for pain relief, as did invalids. And of course, then as now, nursing mothers found them invaluable for calming the baby and making bonding experience super comfortable and even relaxing. (2)

The chairs took off as the Shakers – a religious sect that branched off from the Quaker community – began to build and promote them. In fact, the Shakers did more for the rocking chair than anyone else ever did.  Soon they moved into hotel lobbies, parlors, and the front porches of homes all across America. (3)

The History of Rocking Chair Styles

New styles were developed as people began to produce rocking chairs in earnest. These styles were a far sight different from simply placing any old kind of chair on rocking runners. This of course resulted in sturdier and better-looking rocking chairs, as chair and runner were now designed to work together.

1780 to 1820 was the era of The Windsor Chair. The Windsor Chair has a low, loop back with nine spindles, narrow arms which are also generally looped, and a flat seat. They still look a bit like dining chairs transformed into rocking chairs. It was practical, and it showed up mainly in homes of the New England states. So when you think of Colonials and harbors, you’re likely going to be thinking of this kind of rocking chair.

Of course, the Windsor Chair wasn’t the only rocking chair to come out of New England.  You’ve also got the Salem rocker and the Boston rocker, easily distinguished by their elegant, high-comb backs and thick, scroll seats.

The farmer’s “slat back” style came next. We’ve got quite a few of them here at The Rocking Chair Company. This is the classic Shaker style, with either horizontal or vertical slats on the seat back, as well as the timeless design that most folks think about when they start picturing the classic American rocking chair. It’s the rocking chair of the Midwest: simplistic and rustic, yet at the same time, so very comfortable!

Wicker rocking chairs started showing up around 1860. They may be outdoor pieces today, but they were parlor pieces back then. (4) Today, rocking chair manufacturers typically replace real wicker with synthetic resin wicker, since it’s more durable and environmentally friendly. There just isn’t a rain storm around that can mess that stuff up!

By the late 19th century a lot of folks were building hunting and fishing lodges, especially up in the Adirondack Mountains and other rural, scenic areas of the States. This proved to be pretty great for rustic styles of rocking chairs, since they blended in so well with all the log cabins.  Not sure what rustic style means? Well, think of carved oak or maple wood that’s been deliberately made to look like rough sticks all bound up and bent, then lashed together, to make it look rough and unfinished.  This was particularly loved by the Arts and Crafts crowd, allowing amateur craftsmen as well as well professionals to turn out some great-looking pieces.  Now, people had been using uncut lumber like that for a real long time, but by this point in history there were plenty of store-bought chairs to enjoy, so they didn’t really have to. Folks just started doing it for the sheer joy of the piece, which looks solid and relaxing by anyone’s accounts. (5) Today, the Rustic Natural Cedar Company specializes in the style, crafting each rustic rocking chair out of northern white cedar, which makes them extra-great for porches.

Finally, the early 20th century brought us the Colonial Revival rocking chair and the Mission style rocking chair, two more styles that are still in use today.  Now, didn’t the Colonials in New England use the Windsor?  They sure did, but in this case, Colonial refers to the style of rocking chair rather than who made it popular.  Colonial Revivalists had an idealized vision of what was Colonial furniture, and they made some right pretty pieces.  Think of solid-carved oak furniture with patterns pressed into the wood rather than carved.

Now, the Mission style of rocking chairs are great for people who like a more modern, solid look.  Solid, great blocks of wood that are like cubes with seats cut into them are the hallmark of this style.  Toss in a few cushions, and you’ve got a great seat there.  They look like they’d be quite at home in any hacienda down in New Mexico, but in actuality, this style got its start way – way up north in Grand Rapids, Michigan – by a pair of fellows named the Stickley Brothers.

Have y’all ever heard about some of the freaky coincidental similarities between President Kennedy and President Lincoln? For example, Lincoln was elected to Congress in 1846, and Kennedy was elected in 1946. Both were shot on a Friday, both had successors named Johnson, and their assassins were even born exactly 100 years apart from one another.

I mention all these freaky coincidences because rocking chairs actually provide another uncanny link between these two famous American presidents. President Lincoln was shot in Ford’s Theatre while sitting in a rocking chair. He’d just gotten through a long series of cabinet meetings that day, and the chair had been brought out of storage for him. Now, this rocking chair had a distinctive style: sabre legs and Grecian volutes in the arms. Folks still call this style of rocker a “Lincoln” rocker today. (6)

While President Kennedy wasn’t shot in a rocker, he did make another rocking chair style famous. The P&P Rocking Chair Company gained notoriety after producing Kennedy’s favorite chair. He used it to deal with his back problems, and he took his with him everywhere he went—even on Air Force One! What’s more, he knew a great gift when he saw one, since he gave them off to family, friends…even heads of state. People now just call this rocker style a Kennedy rocker: The chair is shaped, stem-bent, and assembled while the wood is still “green.” (7)

Anybody getting chills yet?

At first, the English didn’t think too much of the rocking chair trend. Granted, they were still smarting from losing the Revolutionary War, but we know that in the 1830s they wrote a bunch of letters home to tell their friends and family members all about America’s “tasteless” and “indulgent” rocking chair trend. (8) Sounds like those guys had no idea what they were missing…or just had a powerful case of sour grapes.

Of course, the Brits did get over it. Rocking chairs sell pretty good in the UK these days.

Don’t be like those early Brits, though. You don’t want to miss out. You can sit your seat in this fine all-American adventure by visiting our full selection of rocking chairs and rocking chair sets. In fact, you can try out quite a few of the historical varieties that I mentioned right here in this article. Get one for yourself or make it a gift—if they were good enough for President Kennedy to give to heads of state, they’re probably good enough for your daughter or grandma, too!